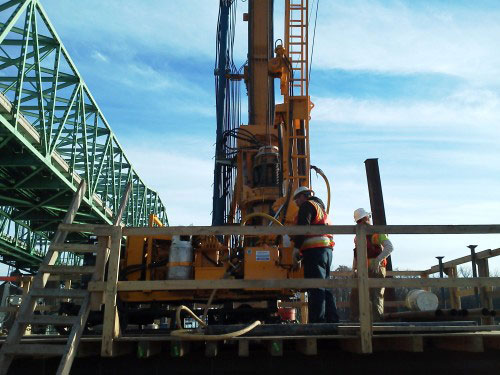 From March to November 2013, Geotechnology, Inc. performed work on the Daniel Boone Bridge, which carries Interstate 64 across the Missouri River, joining the counties of St. Louis and St. Charles, Missouri.

Geotechnology was selected to perform the work due to their responsiveness, expertise and safety record. In its’ 30-year history, Geotechnology has successfully completed numerous near-water and over-water projects, including the recently opened Stan Musial Veterans Memorial Bridge which spans the Mississippi River at downtown St. Louis.

The Daniel Boone project includes replacement of the 1930’s era westbound bridge with the construction of a new bridge over the Missouri River. Foundation inspection holes were drilled within the footprint of each drilled shaft to confirm the rock quality below the bearing surface of each drilled pier (i.e. end bearing design).

The project presented a few challenges to the crews drilling through more than 100’ of alluvial deposits consisting of clays, silts, sands and cobbles that were in close proximity to operating vibratory caisson rigs installing large-diameter steel casings to the top of rock. Drilling for the riverine shafts was done from a contractor-provided elevated platform over the Missouri River and over fully excavated drilled shafts with unsupported span lengths of up to 12’. Because the rig could only be moved from pier to pier by a crane working from a spud barge, the team had to use a small, light-weight, skid mounted drill rig. The mast heights and inability to hoist equipment further than 15’ at a stretch added to the time required to perform the work.

To facilitate bedrock coring using NQ-sized tools, the contractor assembled 4 inch heavy wall pipe in welded sections and lowered that assembly into the 8-12 foot diameter steel casings. The casings were set to the apparent top of bedrock ranging from 80–112 feet below the working platform. Extreme lengths of unsupported casings caused bowing and twisting which added another layer of complexity to the project. 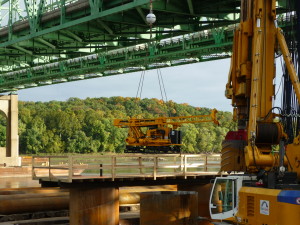 In total, the project required the installation of 42 Foundation Inspection Holes, consisting of 1,950 feet of rotary drilling and 903 feet of NQ2 Rock Coring and 444 rig hours on-site. Geotechnology’s work was completed without accident or injury.

This article can be found in the Drill Bits, Spring 2014 edition, Magazine of the National Drilling Association. Click here to view the online magazine!