The Thelen/Geotechnology – Cincinnati Branch has just begun the third year of a three-year design-build project for the new MLK interchange in Cincinnati, Ohio.  The Prime Contractor is Kokosing Construction and the lead designer is HDR Engineering.  This $80+ million project includes the construction of two new bridges, widening and/or improvements to three additional bridges, removal of two bridges, construction of six ramps, extensive retaining walls and improvements to other roadways in the vicinity of the interchange.

Thelen/Geotechnology provided geotechnical drilling and laboratory testing services during the design of the project.  Project challenges included significant changes in rock elevation with rock excavation required in some areas, wick drains necessary to expedite consolidation of weak soils in other areas, and urban fill that required overexcavation and replacement. 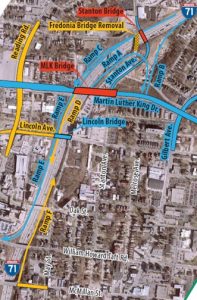 The project will significantly improve the travel time and access to Cincinnati Uptown, Cincinnati Zoo, and University of Cincinnati areas. The project began in the fall of 2014 and is scheduled to be completed in the summer of 2017.

Please contact us for more information regarding our services for your next Design-Build project.