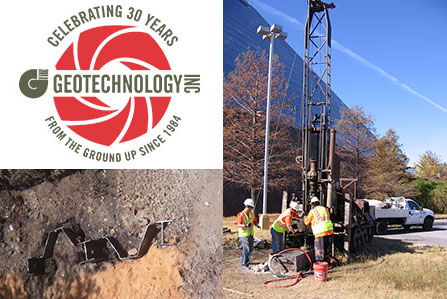 The firm captured a 2014 Grand Award for engineering excellence from the American Council of Engineering Companies of Tennessee (ACEC-TN), and a 2014 Honor Award from the ACEC of Missouri (ACEC-MO).

The Memphis Pyramid, a 20,000-seat indoor sports arena, completed construction in 1991, some nine years before seismic criteria were considered in Memphis. After major sporting events were moved to the FedExForum in 2004 the Pyramid fell into disrepair. A tentative contract agreement was reached in 2008 between Bass Pro Shops and the City of Memphis. By 2010 it was agreed that Bass Pro Shops would lease the facility for a total of 55 years for $1,000,000 per year but only if the city provided seismic retrofitting of the facility.

Geotechnology’s work on the project included performing the initial study and detailed seismic evaluation of the ground conditions, liquefaction and seismic slope stability and preparing performance-based specifications for Specialty ground improvement contractors (design-build approach). Services then continued during Below Ground Seismic Construction to monitor the work and provide additional input when needed.

The project had a number of difficult site conditions and ground movement analysis was complex but the unique approaches Geotechnology provided were critical to the final solution offered by the selected design-build contractor.

“Geotechnology is honored to receive these prestigious awards from the ACEC chapters in both Tennessee and Missouri,” said Ed Alizadeh, President and CEO of Geotechnology, Inc. “The collaborative effort of the teams from our Memphis and St. Louis offices affirms Geotechnology’s mission to utilize all of our resources, equipment and personnel, to consistently seek innovative ways to provide solutions for our clients.”

Geotechnology representatives accepted the awards at separate ceremonies in both Tennessee and Missouri.