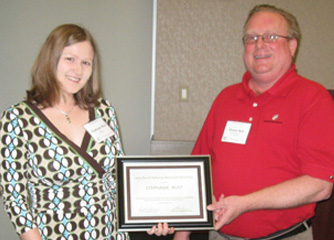 In 2003, Geotechnology established the Ron Eckelkamp Memorial Fellowship at the Missouri University of Science and Technology (Missouri S & T). Ron was one of the founding Principals of Geotechnology and managed the Geosciences Division until his death on October 22, 1996. Ron earned his B.S. and M.S. from the University of Missouri at Rolla (UMR) and served on UMR’s Civil Engineering Advisory Board. Ron was universally respected by those of who worked with him. He was the consummate professional and a devoted family man who set a very high standard in our profession.

The firm has periodically added funds to the endowment, which this year has accumulated a sufficient amount to award our first fellowship. The fellowship is awarded to a Masters candidate in Geotechnical Engineering at Missouri S & T with a preference for students having received their undergraduate degrees from universities in Missouri, Kansas, and Illinois.

Our inaugural fellowship recipient is Ms. Stephanie Rust, a May 2009 graduate in Architectural Engineering at Missouri S & T. Stephanie has maintained a GPA of 3.39, is a member of Chi Epsilon, the Civil Engineering honor society, has held various offices within her sorority, and has been very active in other on campus organizations. She has also worked as an intern for the past three summers for McCarthy Building Company, and most recently at MC Industrial at the Holcim cement plant. Stephanie was awarded the fellowship, $1000 per semester for the Fall 2009 and Spring 2010 semesters by Dennis Boll, P.E., senior geotechnical engineer at Geotechnology, at the GEOMO 2009 conference on May 9 at Missouri S & T.