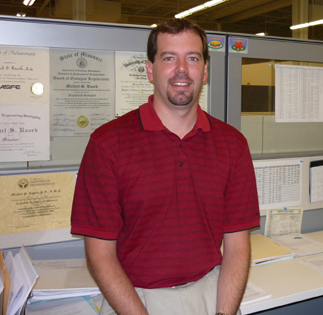 The St. Louis Business Journal chose Mike Roark, senior project manager on the development team, to receive the 40 Under 40 Class of 2011 award. Honorees are determined by a committee of editors and former winners based on career achievements and community work.

Mike has spent 11 out of his 12 years of professional experience at Geotechnology, proving he was a leader from day one. He spent his first years developing innovative geophysical services and applications for clients, which catapulted the volume of geophysical projects at Geotechnology by approximately 600% during his tenure, turning geophysics into the fastest-growing service line in the firm in the past decade. He became the youngest owner of Geotechnology in 2008.

Mike was the first person in the firm to earn LEED accreditation through USGBC, which he is a member of the St. Louis Chapter and its Advocacy Committee. He’s also leading the firm in improving its sustainability efforts through the St. Louis RCGA Green Business Challenge, which is already making an impact on the firm’s operations.

Mike also puts his knowledge to practice and volunteers with the Habitat for Humanity St. Louis LEED-Neighborhood Development committee to assist Habitat in achieving LEED Certification for their Old North St. Louis build. He’s a member and former president of the After Hours Community Band, a local not-for-profit community band that serves St. Louis area communities by playing at civic functions and charitable events.