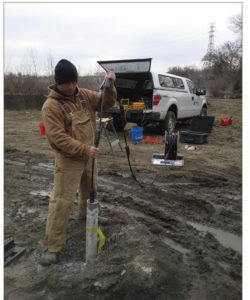 The American Society of Civil Engineers (ASCE) has repeatedly issued dire warnings about our nation’s bridges, roads, levees and other infrastructure. Tennessee and Arkansas are among the states that are heeding the ASCE advice to take positive actions by allocating funds for infrastructure repair and fortification.

As a result of our geotechnical and seismic engineering experience, Geotechnology has been heavily engaged in a number of long-term infrastructure projects with Tennessee Department of Transportation (TDOT) and Arkansas Department of Transportation (ARDOT). Examples of such work are the I-40/I-240 Interchange and the MemFix 4 projects in Memphis, TN, and Highway 67 and US 412 improvement projects in Northeast Arkansas.

East Arkansas and Western Tennessee lie along the New Madrid Fault line, a major seismic zone and a source of historic intraplate earthquakes, so there is a heightened sense of awareness about the need for our services. New developments and infrastructure facilities in seismic zones must be evaluated to assess the potential for earthquake damage.

St. Louis has also taken steps towards seismic retrofitting buildings and highways. Recently we worked on the Robert A. Young (RAY) Federal Building in Downtown St. Louis. The 20-story building, which was 98% occupied, was seismic retrofitted to meet current codes as an alternative to constructing a new building. Geotechnology provided a number of critical services including: geotechnical exploration to determine soil, bedrock, and ground water conditions; and making recommendations for underpinning; geophysical surveys and site-specific study to produce horizontal and vertical seismic response spectra; destructive and non-destructive testing of the existing structural elements within the building with radar scanning of concrete columns and beams to identify size and spacing of steel reinforcement; and load testing that exhumed existing piles beneath the structure to test pile capacity.

Other parts of the country should also be concerned about risks associated with seismic events.

Every property consists of a unique combination of geologic and structural factors that must be considered to determine what might happen to a structure during an earthquake. This can only be done through an individual site study. The Geological Survey (USGS) does not conduct assessments of individual properties. Private practice geologists or engineers must conduct these site assessments.

Our capabilities include liquefaction and lateral spread analysis, seismic site classification and site-specific hazard and ground response assessments, all of which are performed in cost-effective fashion with the latest and most advanced methods and technologies. Through the years, our site-specific seismic studies have often resulted in less conservative design information levels, which potentially lead to substantial saving in construction costs.