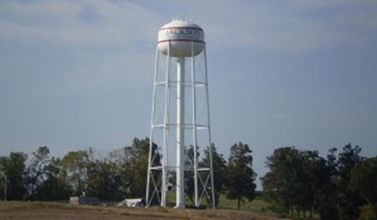 Geotechnology won an Honor Award from the American Council of Engineering Companies (ACEC)-Missouri for its innovative geotechnical engineering solutions.  The company was recognized for its evaluation of the project site for a new, 400,000-gallon elevated water storage tower for the City of Jackson, Missouri. Geotechnology’s client was Horner & Shifrin, Inc.

The project presented two challenges:  the tower had to be built near the existing water well and pump house, and the area had karst (underground voids) with an existing sinkhole located nearby. Geotechnology’s engineers developed an interdisciplinary approach to these challenges.  First, they performed a geophysical survey using the seismic reflection method to profile the subsurface and then used that data to perform “smart borings” in the locations where they were truly needed. The approach helped them identify higher quality bedrock, and avoid the karst features.  The result was a simpler design for the tower, which was relocated away from the area most impacted by the karst, and a reduction in overall construction cost and performance risk.